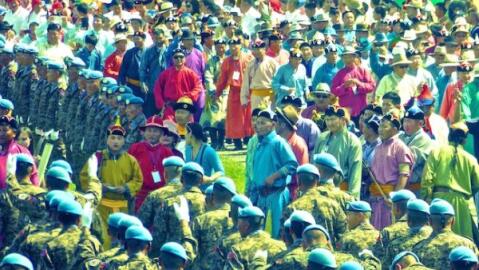 After almost an entire week with no shower touring the Gobi desert, we welcomed a brief return to Mongolia's capital city, Ulan Bator.

This also coincided with Mongolia's popular and widely watched annual Naadam festival.  This is the equivalent of the Olympic Games in Mongolia.  It is held every year between the 11th to 13th July and commemorates the 1921 revolution when Mongolia declared itself a free country.

The days during, before and after Naadam are all public holidays in Mongolia and everything shuts down for the big party.

Tickets are released around 2 weeks beforehand and are priced $20 per person or $40 if you want to sit in the VIP section around the President and the corporate sponsors.

We were very fortunate to secure tickets via Sunpath Hotel in Ulan Bator:

Trek through Mongolia on a gay tour

Feel like Ghengis Khan himself on Out Adventures' brand new Mongolian expedition. The active adventure begins in Ulaanbaatar before quickly swerving into Mongolia's remote countryside. With a group of like-minded men you'll ride camels through Gobi Desert, hike the grasslands of Khustai National Park and ride horses in the western province of Bayan-Ulgii. Best of all, the tour aligns with the country's famous Golden Eagle Festival.

The opening ceremony of the Naadam festival is the most popular event.  It attracts the most press attention and the stadium is usually full as this is the main event everyone wants to see:

The atmosphere amongst the crowd around us was exciting, despite the temporary rain storm and the strong heat.

Due to its popularity, tickets for the opening ceremony sell out very quickly.

Therefore large crowds also gather outside the stadium in their numbers to watch the events on the big screens:

The opening ceremony features a variety of events, processions, military parades and ethnic dances before the games begin.

The costumes worn by the performers at the opening ceremony make it very colourful:

Even the police and the soldiers get involved:

The president of Mongolia is in attendance who traditionally opens (and later closes) the games.  He sits in the exclusive VIP box and the parade takes place before him (and those in the VIP box, hence the higher prices for these tickets).  A military procession also takes place as part of the events:

The horse riders also participate in the opening ceremony processions around the stadium whilst the dances continue in the centre of the arena giving an impressive display of colour, music and Mongolian traditions:

And once the opening ceremony dances and processions have finished, the wrestlers line up to enter the stadium ready for the first round of the Games:

The Games of Naadam Festival

In Mongolia, the festival is called “eriin gurvan naadam” (эрийн гурван наадам) which means: “the three games of men”.  The three games are wrestling, archery and horse riding.

Women have recently started participating in the archery and girls in the horse-racing games  Unfortunately women are not allowed to participate in the wrestling.  This is apparently due to avoid embarrassing the men (!): apparently one year an Amazonian woman defeated all the men and won all the awards.

So, to avoid further embarrassment in future it was a made a requirement that participants wear an open sleeved top in the wrestling (therefore preventing women from participating):

The rules of Mongolian wrestling are simple.  Each round is not timed and the objective is to make your opponent touch the ground with any part of their body (except their feet or hand).

Each wrestler has an “encourager” called a “zasuul” who sings a song of praise for the winning wrestler after rounds 3, 5, and 7:

Essentially the wrestling comes down to strength, so the larger the man the more likely he will win.  Wouldn't want to get into a fight with some of these lads:

The horse riding competition takes place outside the stadium and also around Mongolia  The races are around 15-30km long.

Horse riders impressed us the most because they start from a very young age.  Children from 5 to 13 are chosen as jockeys who train in the months preceding the races:

As part of our tour in the Gobi desert, we were fortunate to watch a local horse riding competition.  The contestants were mainly young boys on galloping horses – completely wowed us:

After the horse ride is complete, the boy riders have a quick shower:

The archery stadium at Naadam is free for all to attend and watch.

In this competition both men and women participate.  The archery events are played by teams of ten and each archer is given four arrows.  The team must hit all 33 “surs” (leather cylinders).  Men fire their arrows from 75 meters away while women fire theirs from 65 meters away.

The first team to hit all 33 surs wins.

Traditionally the archers wear their national clothing called, “deel” during the competition and of course when accepting their medals at the medal ceremony:

And once the festivities are finished, the crowd gather at Ulan Bator's main central square (Sukhbaator Square) to witness a spectacular and very impressive fireworks display:

For more from our travels in Mongolia, check out our travel video: 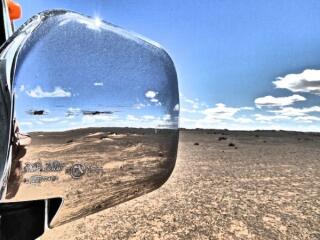 Our tour of the Gobi desert
← Read Last Post 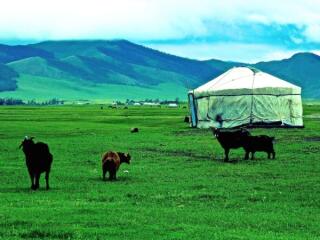