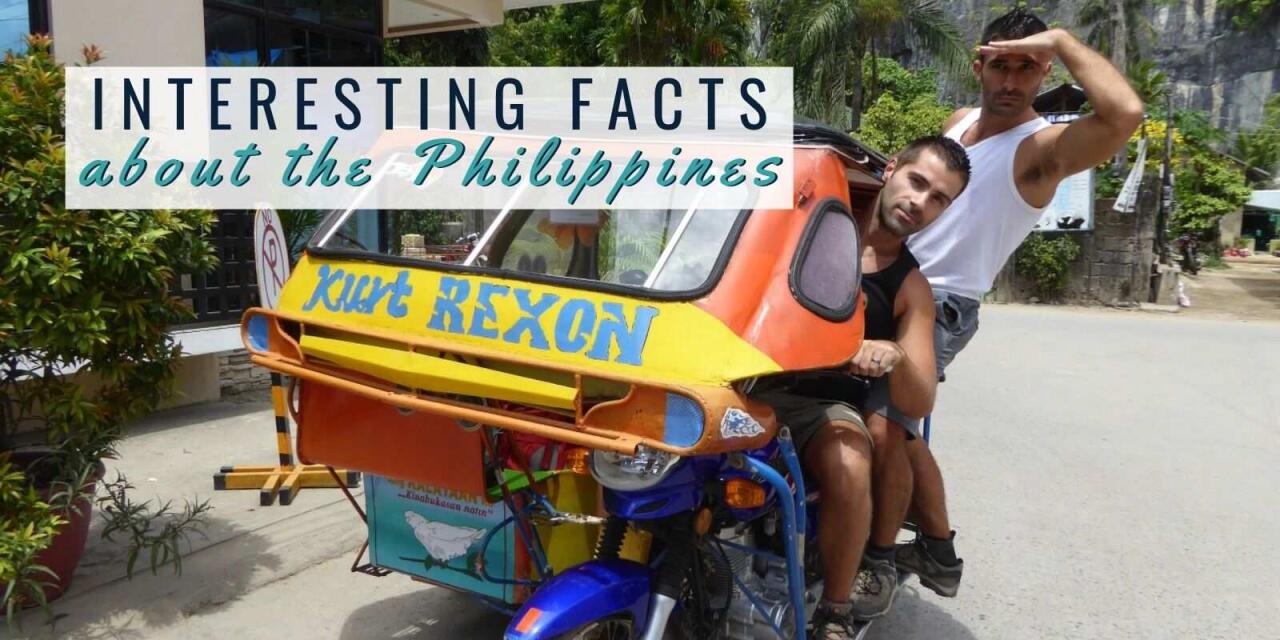 Our travels in the Philippines was an amazing experience. The country's got it all: paradise-like beaches, a variety of yummy traditional foods, but best of all, the Filipinos!

The Pinoys (nickname for Filipinos around the world) are well known for their hospitality; the Filipino hospitality is a thing here! We just love them – anywhere in the world you see a Filipino, their faces always exude this feeling of warmth and friendliness. For us, they are (amongst many other things!) what makes the country so special!

These are our 10 interesting facts about the Philippines following our big trip as a gay couple around the country, which included Manila, Boracay and the gorgeous Palawan.

The first LGBTQ political party in the world

Unfortunately, due to lack of political funding, their campaigning efforts have been limited, so at best they managed to get 0.38% of the votes in the 2010 election and 0.37% in 2013. As a result of the poor turnout, in accordance with the voting rules, Ang Ladlad was disqualified in the 2016 elections. Nonetheless, this is one of many reasons why we think the Philippines is one of the most gay friendly countries in Asia.

Advice for LGBTQ travellers to the Philippines

We found the Philippines to be very gay friendly and never had an issue getting a double bed in the places we stayed at. However, a conservative attitude is prevalent across the country due to the strong influence of the Catholic church, so be cautious when heading to remote areas. Also note that ALL travellers should avoid the south, especially Mindanao, the Sulu Archipelago and the Zamboanga Peninsula where pirates and violent crime is prevalent. Read more in our article about why the Philippines is gay friendly as well as our interview with local boy Rione about gay life in Manila.

Your social media will explode!

After spending time with Filipinos, your social media following will just explode! The Filipinos are so enthusiastic about their Instagram and Facebook that they were ranked as THE highest selfie-takers in the world by Time Magazine! In this study, Makati City (Manila) was crowned the selfie capital of the world, with 258 selfies taken per 100,000 people. Further down the list is Cebu City ranked in 9th place followed by Quezon (also in Manila) at #59 and Iloilo City at #72.

The Filipinos are one of the tech savviest people we've met, with almost everyone of every age posting something on some form of social media. Since visiting we've definitely seen a massive jump in our social media following from the Philippines!

Jollibee: the campy essence of the Filipino spirit!

Jollibee is THE ubiquitous fast-food chain, known and loved by every Filipino everywhere! They serve up gems like the Amazing Aloha Burger (with bacon and pineapple) or the Tuna Pie (in place of Apple Pie).

It started out as an ice cream parlour in 1975, opened by Filipino, Tony Tran in Quezon City (in Metro Manila). It then evolved to become a fast-food restaurant selling hot dogs and burgers.

We love the cute, busy-bee mascot, which is meant to represent the essence of the Filipino spirit: hard-working, optimistic and ‘jolly’ as explained by founder Tony Tran in his interview with the Economist.

Jollibee is not only popular throughout Asia, but also in North America, the Middle East and expected to hit Europe soon!

When we arrived in Manila Naia airport for our first time, we noticed a sign warning this was a ‘No “Wang Wang” zone‘:

This made us giggle as we first thought this was a joke or a preventative measure to stop men exposing their wangers in public. But the immigration officer explained to us it is actually an expression used to prevent queue cutting.

The phrase wang wang in fact derives from the sound police car sirens make. But some self-important people would mount fake police sirens to their cars, then use them to wang wang and cut their way through heavy traffic.

The “wang wang mentality” and “wang wang culture” are popular keywords used by Politicians when campaigning about trying to stamp out corruption and abuses of power.

Karaoke: popularised by a Filipino

Life lesson tip: never ever dare take on a Filipino at karaoke. They will floor you!! These guys are genetically programmed to be amazing singers from the moment they leave the womb. Yet they’re so humble about it – and that’s how they catch you out!

Whilst it was a Japanese musician (Daisuke) who first invented karaoke in 1971, it was Filipino, Roberto del Rosario who first patented the “Karaoke Sing Along System” in 1975 and subsequently commercialised it.

Karaoke is so popular in the Philippines that it is even used commercially to promote grocery items in supermarkets, as we found out when we visited the SM Megamall in Ortigas (Metro Manila). You can be sure if you’re hanging out with a group of Filipinos, the karaoke box is likely to make an appearance at some stage!

Jeepneys are the most popular way of getting around in the Philippines. They are colourful and crowded. One of the apparent origins of the word jeepney is from the words jeep and knee because passengers sit so closely together (if you even manage to get a seat!).

They were initially made from the US Military jeeps left over after the Second World War. They have since been developed into this colourful public service industry ubiquitous throughout the country. Just stay well clear from one if you see it tearing through traffic!

The tricycle is another popular way of getting around the small towns and rural parts of the Philippines.

Tricycles are motorbikes with a sidecar attached to them to carry passengers. The engines of the tricycles range from around 50 to 125cc, so when approaching a steep climb, we would have to get out to reduce the weight to help it climb up!

We had lots of tricycle fun when we succeeded in hijacking this colourful beaut in El Nido:

If you head to the beaches in the Philippines, you're bound to see plenty of bangka boats. A bangka is like a canoe, supported by two outriggers made from bamboo (called katig) on each side, which act as a support and stabiliser for the vessel hub.

The vessel hull is made from marine plywood and painted with several coatings of epoxy paint. The smaller ones can be manoeuvred by paddles and the larger ones with an engine.

Bangka boats are also used by the Maori in New Zealand (called waka ama), in Hawaii (called wa'a) and in Indonesia (called jukung). This was the first time we encountered them in our travels in Asia and they became one of our defining memories of a Filipino secluded island beach.

The spoken and written English is all Americani-zed – so ordering a glass of waaaaaa-der (ie in a US accent) will get you further than our British twang of war-ter, which only led to a fit of giggles…

As a result of the Spanish, you will notice words like fiesta (party) and guapo (a hot guy) commonly used in the Filipino language. Some of the popular Filipino foods also have Spanish influenced names, like adobo (meaning ‘marinade' in Spanish) and lechon (suckling pig).

Catholicism is still the main religion in the Philippines with over 76 million of the world’s Catholics (the highest after Mexico and Brazil). As a result, Papal visits draw huge crowds. We also noticed certain beliefs and practises still followed, like skipping the unlucky 13th floor in high-rise buildings:

The Filipino flag is the only one in the world, which can determine whether the country is at peace or at war, depending on how it is flown. It has a white triangle with a sun surrounded by 3 golden stars representing the 3 island groups: Luzon in the North, the Visayas in the centre and Mindanao in the South.

It also has a strip of red and blue:

The true highlight of the Philippines: the Filipinos!

As we said at the start of this article, the Filipinos are such warm-hearted and welcoming people that you will leave craving to return to them. Fact!

Cheesy-ness aside, the OFWs (or Overseas Filipino Workers) are in fact the country’s largest and best export, due to the large amounts of remittances sent home each year.

Remittances from OFWs account for around 11% of the Filipino economy. It’s become such an important industry that each year, the government teaches thousands of people the skills they need to get jobs abroad.

This explains why the Pinoys are such an international bunch and why we’ve been so fortunate to meet so many of them around the world.

Watch our video about our travels in the Philippines as a gay couple:

35 thoughts on “10 interesting facts about the Philippines”