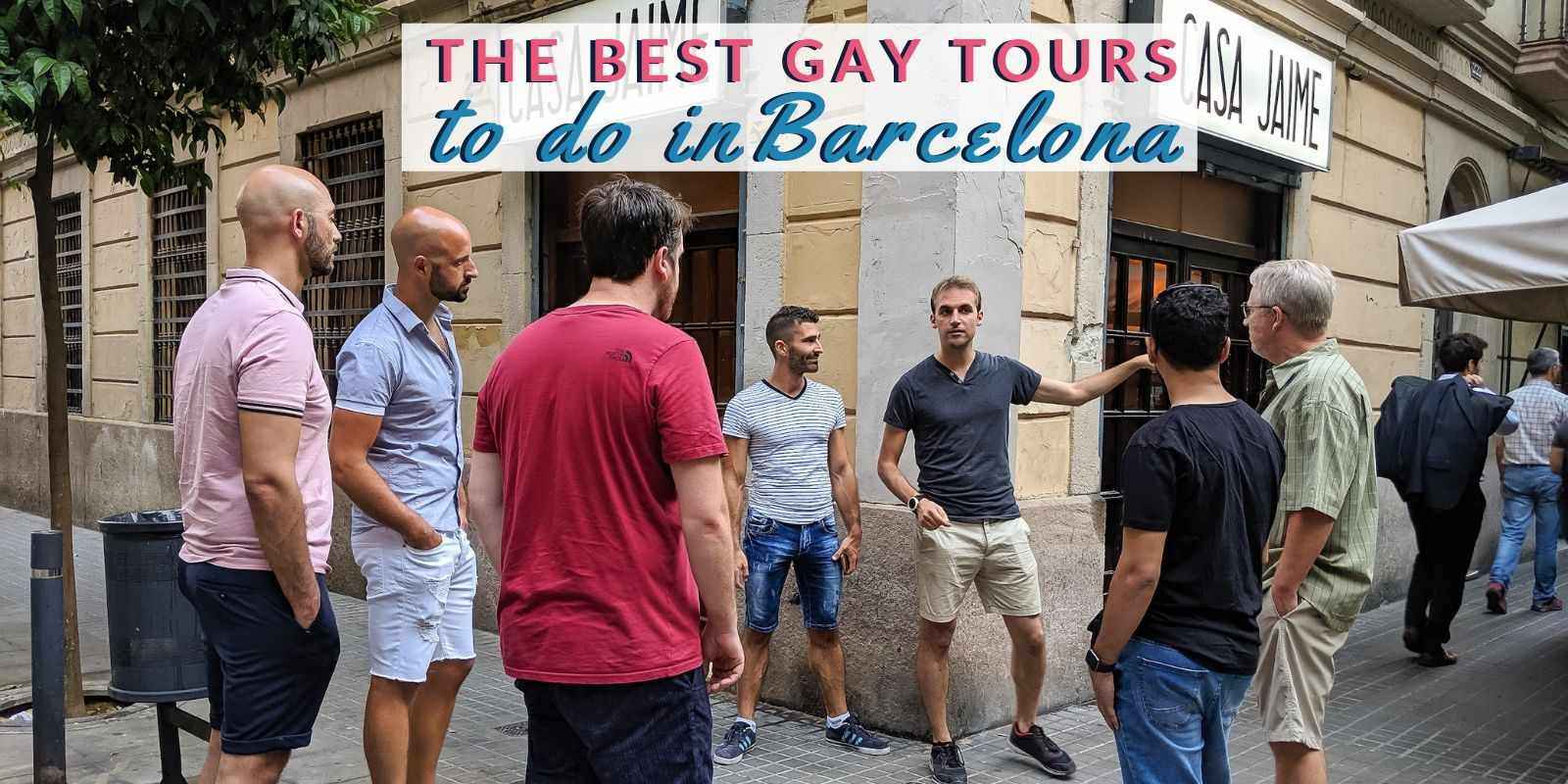 A city which bakes under constant sunshine. Buildings that hold an old-timey charm, yet still look new and polished. A rich, albeit tragic history filled with twists and turns. A community of people who welcome you with open arms and wide smiles. What would we ever do without Barcelona?

Having toured the city so extensively that we could easily navigate from one end to the other blindfolded, we can't get enough of this shining Spanish metropolis!

From its fiery culture to the stunning beaches, we've put together a list of LGBTQ themed tours you need to do and will make you fall in love with this city.

A little night music, a few drinks (or a lot), some draaag…

This tour is so much fun to join in on! If like us, you can't ever say no to a party, then this gay nightlife tour of Barcelona is a must.

We partied until dawn, bouncing from lively bars like Moeem, to sacrilegious spots like La Chapelle, which has walls covered in Christian artefacts…! With crosses, Virgin Mary statues and rosary beads galore, we thought we'd walked into a Madonna fan club!

Of course, it wouldn't be a complete gay night out without a stop to a drag bar. After the tour finished, we headed to Believe – our favourite drag bar in Barcelona. Stunning queens, stellar performances and wit so quick that we could barely protect ourselves, this club definitely stopped us believing in life after love! For if life exists outside of this club, then we don't want to know about it.

The tour kicks off at 10 pm. We got picked up from our hotel by our handsome guide from Gaily tours who took us to the sprawling gay scene in Gaixample. Spotting hundreds of couples of varying genders running around, laughing and enjoying the night, brought smiles to our faces.

Showing us the best that Barcelona nightlife has to offer, this tour gave us a taste of the magic that is the gay scene.

Loosen up those belt buckles and get your tapas on!

This private tour of Barcelona takes you around to the best restaurants in the city. Tucking into the delicious tapas that the Eixample neighbourhood has to offer, we fell in love with some brand new eatery spots. There's also a vegetarian option, so don't feel you can't do this tour if you don't eat meat.

The entire tour takes around 3 hours and is completed on foot. All the locations we visited are close together though, so there's no need to worry about getting indigestion between stops!

In total, we visited about 3 tapas bars, each with its own unique style and flavours. Our guide was super chatty. As well as telling us all about the different dishes we ate, he told us about the gay life of Barcelona and what it was like growing up gay in Spain.

What we loved most about this tour is that we went to places like Casa Jaime, which is very local, authentic. and gay owned. Forget all those restaurants along Las Ramblas offering “genuine paella and Sangria”, which are just full of tourists being charged top dollar. This tour takes you to the real deal, where all the locals hang out and you're likely to be the only foreigner in sight! For more inspiration, be sure to check out our guide to the best gay restaurants in Barcelona.

3. Discover the city of Gaudi with a gay local guide

The Modernist House Tour proves just that. We never had much appreciation for a building's architecture before, yet this experience changed all that!

While we didn't get to go inside all the buildings, we got to see some of the hidden gems of the city and learn about all the fascinating histories that lay behind them.

This tour introduced us to the fantastic work of Gaudi, Josep Puig i Cadafalch and Domenech i Montaner. These men helped create the magic of Barcelona today, combining neo-Gothic design and rigid facades.

We lived for Gaudi's signature building, the Casa Milà (also called “La Pedrera“) – a building shaped like ripples in a body of water and decorated with an ornamental exterior! This structure broke down barriers in the world of architecture with its one-of-a-kind appearance. We got serious envy when we learned about the family who once lived in this 92-room paradise. It was commissioned to be built by Roser Segimón and Pere Milà – both were known for their seriously flamboyant and lavish lifestyle that would put even us to shame!

The highlight of the trip has to be the final stop – saving the best for last! Gaudi's unique and magnificent Sagrada Familia. Having been inspired by the churches of Italy, plans for the design of the monument we know today quickly morphed into something quite incredible. At the end of the tour, we had time to wander inside, which allowed us to fantasise about renewing our vows under the stunning rainforest-like interior rooftop.

4. Gay tour of Sitges from Barcelona

We love a gay beach. And if it's a gay nude beach, then that's even better. This tour is all about visiting the magnificently stunning Sitges, which has to be one of our favourite gay beaches in Europe.

Getting to chill out on the warm sands and indulge in some Public Display of Affection with your (same-sex) partner, surrounded by likeminded individuals who don't give a flying fudge what we're doing, is just so refreshing and liberating! Playa de los Muertos is the official gay nude beach of Sitges, but it's a fair distance from the main town. We prefer the more mixed Balmins beach, which is clothing-optional, but much easier to reach and just as gay!

But this tour is not all about soaking up the sun on the beach. We also visited the picturesque town of Sitges, watching local villagers set up their stalls, shoo-ing away the pesky seagulls, and haggling over prices for those must-have fridge magnet souvenirs.

We dotted around between the restaurants and bars, finding nothing but chatty fellow gay travellers, great food and a sunny atmosphere. Oh, what we wouldn't give to live here! For more, check out our comprehensive gay guide to Sitges.