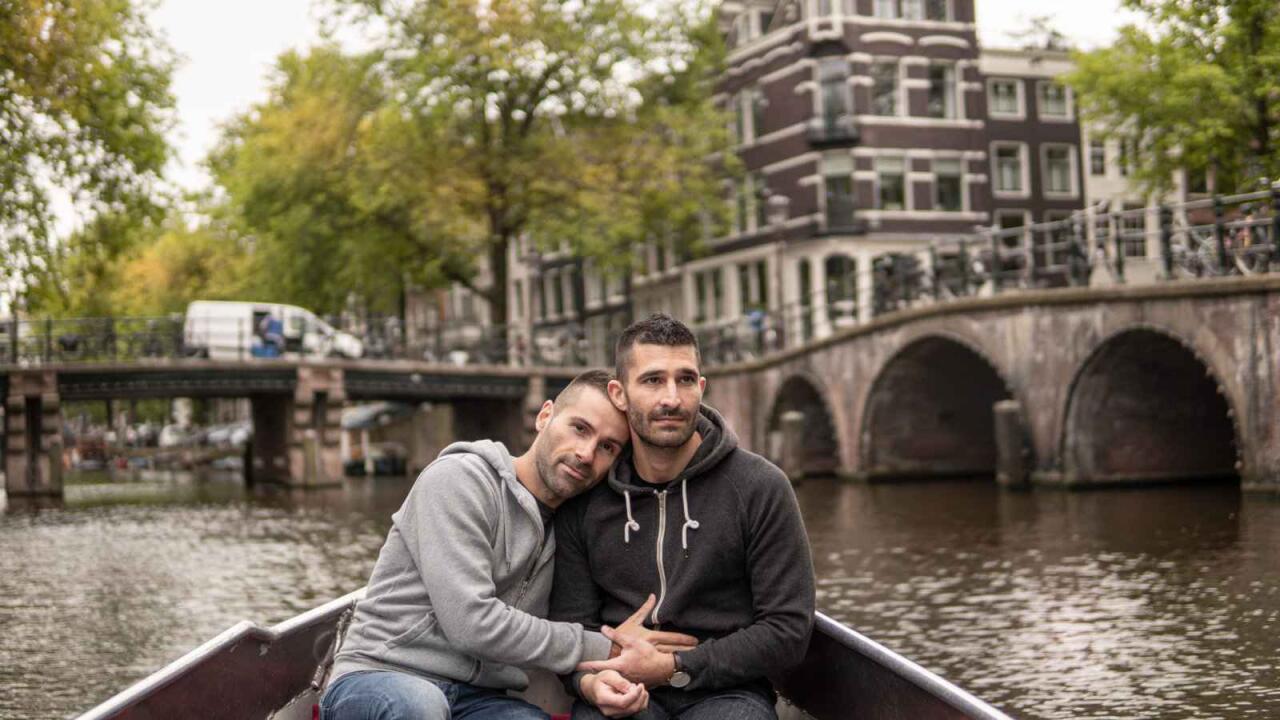 We love visiting Amsterdam. Whether it's for a city break, romantic weekend or a gay party, we always know we're going to have a terrific time.

Whilst Amsterdam is most notorious for its “coffeeshops” where you can smoke joints legally, it is also culturally rich with excellent museums and has the most distinctive urban landscape. The city is dominated by water, with 165 canals, around 500 bridges, lots of cute narrow cobblestone streets and many many many bicycles! It's so picturesque that the network of canals in the 17th-century historic old town (called the “Canal Ring“) was listed as a UNESCO World Heritage Site in 2010.

Amsterdam is also super gay, which is not surprising given that it is the capital city of one of the most gay friendly countries in the world. Just like the gay scene of Berlin, Amsterdam is one of the few places in the world where we feel comfortable walking the streets holding hands or don't feel like we have to look over our shoulders when kissing in public. This is one of many reasons we also rate it as one of the top gay travel destinations in Europe.

It also has some fantastic parties, gay hangouts and many events, which we've summarised in this gay Amsterdam travel guide:

Reguliersdwarsstraat is the main gay street of Amsterdam. It is located just outside of the city's Canal Ring in the south of the city. Here you can find most of the gay bars, shops, clubs and cafes.

Further up from Reguliersdwarsstraat just by the Westerkerk church you can find the large pink Homomonument triangle memorial. When it was opened in 1987, it became the first memorial in the world to commemorate all gay men and women who were persecuted during the Second World War. Next to the Homomonument is the “Pink Point“, Amsterdam's official gay and lesbian information kiosk.

Our favourite coffeeshops and gay cafes in Amsterdam are located on Reguliersdwarsstraat. Remember in Amsterdam a cafe is a place you go for caffeine and a coffeeshop for smoking.

These are some of the best gay clubs in Amsterdam, which we loved:

These are some of the best monthly gay parties in Amsterdam you may want to look out for during your visit:

Gay cruising clubs like Church and Eagle (see above) are the best places to head when it's too cold or wet outside. For outdoor fun, these are the more notorious gay cruising spots in Amsterdam:

Gay saunas and bathhouses in Amsterdam

Currently there is only one gay sauna in Amsterdam called Nieuwezijds, named after its address at Nieuwezijds Armsteeg 95. It is conveniently located in the Canal Ring, very close to Amsterdam Centraal station.

Nieuwezijds has events like “Mellow Mondays“, “No Towel Tuesdays” and a bear night on the last Saturday of each month. It is open every from midday until 6am the next morning (extended to 10am on weekends).

Amsterdam Pride is the big one that takes over the entire city and is one of the most famous Pride events in the world. There are also a handful of other gay events taking place throughout the year:

Amsterdam Bear Weekend in March: the best way to welcome the Spring to the city, with your bear buddies to hand! The Bear Weekend includes pub crawls, parties and the election of the “Mister Bear Netherlands“.

Amsterdam gay Pride in July/August: the last week of July and the first week of August the city turns into one fabulous colourful party. The Amsterdam gay Pride parade in early August is world-famous because it is the only one that takes place on the water, with 80 boat-floats making their way through the canals. Also not to miss during Pride are the street parties, particularly on Reguliersdwarsstraat.

Amsterdam Leather Pride in October: the biggest leather party in Holland attracting thousands of leather and fetish fans on the last weekend in October. As well as lots of parties, it includes the crowning of the new “Mister Leather Amsterdam“, “Mister Leather Netherlands” and “Mister Leather Europe“.

There are many gay shops in Amsterdam depending on what you are looking for. These are some of the best ones:

Amsterdam is one very gay friendly city where you are unlikely to ever have any problems finding a place to stay that welcomes gay travellers.

Whether we were travelling on a budget, a romantic break to celebrate an anniversary, a weekend city break from London or a stag weekend, every place we've stayed at has been welcoming and never had an issue about us sharing a double bed. For more information, check out our top 10 favourite gay hotels in Amsterdam and also read what we think are the best hotels in Amsterdam for bedroom fun.