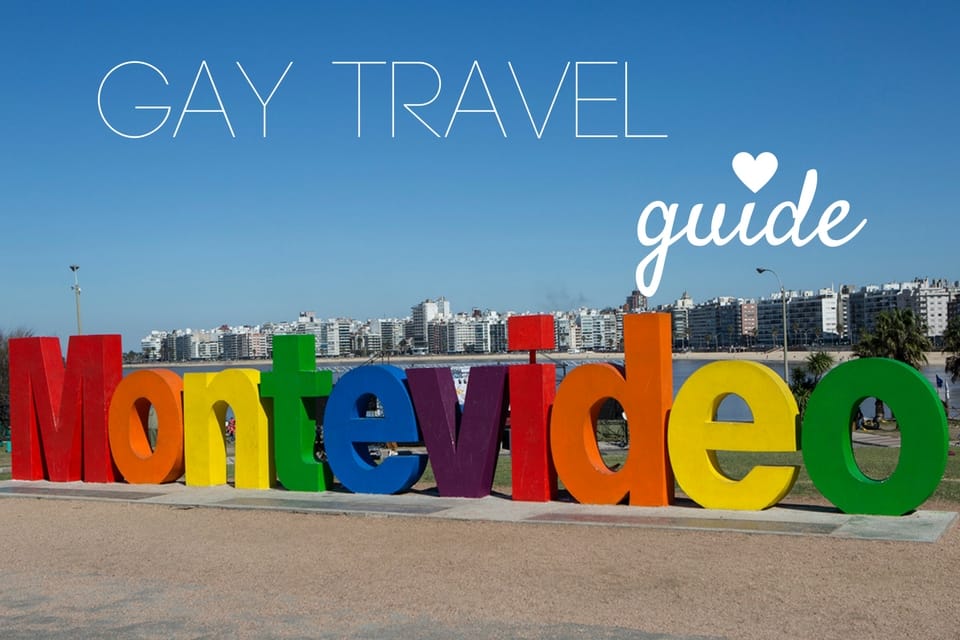 Uruguay is an extremely gay friendly country, not only across Latin America but in the world. Gay rights in Uruguay have long been secured and respected: homosexuality was decriminalised in 1934, anti-discrimination laws firmly in place since 2003, adoption laws since 2009 and gay marriage implemented in early 2013.

Montevideo, the capital of Uruguay, is frequently rated as one of the most gay friendly cities in the world.

And now by the Nomadic Boys…especially when this is what you see on your way into the country:

There are plenty of things to do in the city for the gay traveller, so we've put together our gay travel guide to Montevideo featuring the best gay bars, clubs, events and hotels to stay in the city.

We found Montevideo to be a chilled and relaxed city. The population is only around 1.3 million, but there's nonetheless a vibrant gay scene.

Here's our gay map of Montevideo showing the best gay bars, hotels and hangouts we discovered during our stay.

Montevideo is an extremely gay friendly city with most hotels welcoming LGBT travellers with open arms. These are the gay friendly hotels in Montevideo that particularly stood out for us:

This former hotel casino has been revamped into one of the most luxurious hotels in the city. It's located in a European style building, mixing classic architecture with modern design. Check out the iconic Philip Stark designed horse lamps in the reception area for example. The suites at the Sofitel offer incredible views over the Ramblas beachfront: you'll feel just like a Bond girl staying here!

The in-house 1921 Restaurant is set in a large grand room with a very dramatic glass chandelier. This is the place to come for romantic and very extravagant dinner.

My Suites is a classy, sexy and super gay friendly boutique hotel, located just down the road from the Ramblas beach front. The hotel is themed around wine with each floor named after a bodega (winery). Every evening, wine tastings are offered to guests accompanied with a lecture by a sommelier. The staff are very welcoming to gay travellers, they even made a YouTube video to show this.

The Holiday Inn is a convenient option right in the heart of the Old Town. It is minutes walking distance to Plaza Independencia and the pedestrianised Sarandí street. The hotel has a basic gym, a large pool and the Junior Suites even have a Jacuzzi. Holiday Inn are so gay friendly, they are not only members of the Uruguay gay chamber of commerce, they also hosted their 2016 conference.

To find out more, check out our 10 cool gay friendly hotels in Uruguay.

There are a handful of gay bars in Montevideo where you can head for drinks with friends. As with the gay scene of Buenos Aires, everything starts late here. As such, we've also included a few gay restaurants which are more like resto/bars: places you can come earlier in the day.

Other gay friendly restaurants worth checking out are La Cocina de Pedro and Francis.

There are several major gay events both in Montevideo and across the country, the main ones are as follows:

Excited to be promoting gay travel with the Uruguayan gay chamber of commerce and @alatlgbt at their annual conference in Montevideo.

There are 2 popular gay saunas in Montevideo as well as a gay cinema:

Best things to do in montevideo

Montevideo offers plenty of things to do, particularly around Plaza Independencia in the Old Town (Ciudad Vieja) and the Rambla beach promenade.

# The night we met I knew I needed you so And if I had the chance I'd, never let you go So won't you say you love me, I'll make you so proud of me. We'll make 'em turn their heads every place we go… …So won't you, please, be my, be my, be my little Seby, My one and only- Say you'll be my darlin' Be my Seby now, wha-oh-oh-oh # Simply had to get a Dirty Dancing song lyric into our tango class ❤️ For more gay travel fun from us, check out and subscribe to our YouTube channel- link is in our bio.

For more inspiration, check out our 10 interesting facts about Uruguay you didn't know and plan your holiday with our 1 week Uruguay itinerary.