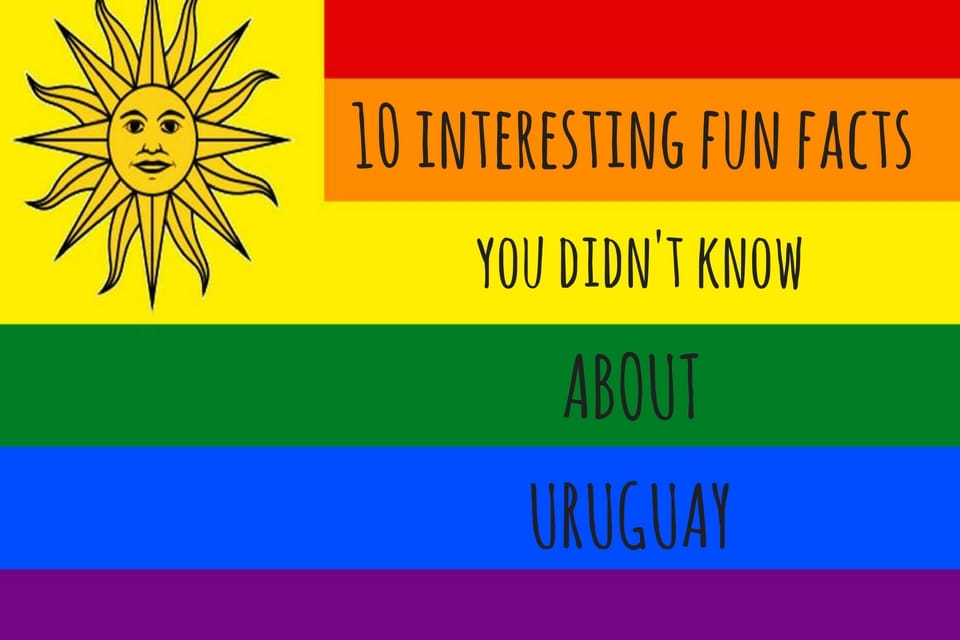 Uruguay is like the Netherlands of Latin America – a global leader of LGBTQ rights and a very liberal country.

Travelling through the country as a gay couple we felt very comfortable and welcome everywhere we went, which is why we rate it as one of the most gay friendly countries in the world.

We made a lot of gay friends around the country during our trip, who gave us a fascinating insight into what LGBTQ life in Uruguay is like, as well as other cultural insights. Based on this, we've put together this list of our interesting facts about Uruguay you didn't know:

1. The longest national anthem in the world

In 1833, the Orientales, la Patria o La Tumba (“Uruguayans, the Fatherland or the Grave”) was officially proclaimed the National Anthem of Uruguay. Orientales comes from the official name of the country: “The Oriental Republic of Uruguay”.

This mammoth of an anthem has no fewer than 11 verses and 105 bars of music. It is almost 5 minutes long, making it the longest national anthem music in the world.

It's also quite catchy:

2. Uruguay is a very gay country!

Not many people know this about Uruguay (largely cause it's such a small and unassuming country), but it's a super super gay place! It's so gay that our Argentinian friends often quip – “There are no fully straight men in Uruguay – they're all either bi or gay!”

Being gay became legal in Uruguay in 1934 (long before the US did it in 2003 and the UK in 1967), anti-discrimination laws in place since 2003, adoption laws since 2009 and gay marriage implemented in early 2013. Uruguay has always been seen as a very liberal country. For example, it was the second country in Latin America (after Cuba) to legalise คborƬions in 2012 and the first in the continent to establish a welfare state in 1903.

The reason? Uruguay has for many years bucked the tradition of Catholic influence sweeping Latin America. Since 1916 there has been a strict separation between state and religion written into the constitution and religious instruction banned in public schools. In addition, all religious holidays have since been secularised. For example, Easter is referred to as La Semana de Turismo (Tourism Week), Christmas Day is called Día de la Familia (Day of the Family) and the Catholic holiday of 8 December (the feast day of the Immaculate Conception of Mary) is Beach Day in Uruguay.

All this has helped Uruguay become the LGBTQ trailblazer it is today!

3. Tango was born in Uruguay!

Actually, this is not strictly true. Uruguay cannot lay sole claim to the tango and neither can Argentina.

This sultry dance was in fact invented by the urban lower classes in both Buenos Aires and Montevideo in the Rio de la Plata basin, which forms the natural border between the 2 countries.

In 2009, both countries successfully applied to include the tango in the UNESCO Intangible Cultural Heritage Lists. And in 2016, both countries equally captivated the Nomadic Boys with their Queer Tango offerings. In Montevideo, gay couples can take Tango classes at Teatro Solis, which we tried and don't think we did too badly:

The 29th day of each month is officially Gnocchi Day (Dia de Ñoquis), the day when most families will cook this potato-based pasta. This used to be the day before payday when people ran low on money, so gnocchi was the perfect filling meal, made from inexpensive ingredients like potatoes and flour.

This is also a nod to the strong Italian influence in Uruguay as a result of the large immigration from Italy between 1870-1960s.

Candombe is an Uruguayan folk dance, which originated from the African slaѵҽs in the country during the 1800s. It's now a prominent part of the country's carnival parade taking place in the streets of Montevideo every February.

The folk dance is a fusion of African traditions with choreographies, wild rhythms, improvised steps and energetic, semi-athletic movements. Candombe was also inscribed in 2009 on the UNESCO Representative List of the Intangible Cultural Heritage of Humanity.

The music is performed by a group of drummers called cuerda and the performance involves 3 types of barrel-shaped drums being played:

This is a candombe performance we caught on the streets of Montevideo when we visited in September 2016, which reminded us a lot of some of the gay Pride events we've been to in our travels!

6. Salt shaming: the crackdown on sodium

Uruguay has had problems with obesity and arterial pressure. To combat this, the government introduced laws to make salt less accessible: the salt shaker has been banned!

In Uruguay, salt is banned from schools and from being served on tables in restaurants. If you want salt, you have to ask the waiter to bring some to you. The same applies to ketchup and mayonnaise. The law also requires restaurants to provide warnings on menus about salt consumption and must offer low-sodium alternatives to its clients.

Uruguayan wine. Bet you didn't even know it existed?

There's a massive wine industry in the country with over 20,000 acres devoted to it. Uruguay is one of the top 5 wine producers in South America (along with Argentina, Chile, Brazil and Peru) with the Tannat grape being the most famous.

The Canelones region around Montevideo has the most concentrated wine production, where you can visit wineries like Bodega Bouza as part of a day trip from the capital city.

The chivito is the nation's favourite snack and the national dish.

It is a sandwich consisting of a thin slice of steak, mozzarella, tomatoes, mayonnaise, olives, bacon, eggs and ham, served in a bun with chips. PHEW!

Chivito translates to small/baby goat. It originated in the 1960s in a restaurant in Punta del Este when a customer from Argentina ordered a chivito roasted goat dish. The restaurant owner didn't have any goat meat to hand, so he instead served up a toasted bread sandwich with ham, steak, seasoning and various ingredients. The customer loved it so much that the restaurant started replicating it for other clients and voila, the national dish was born!

11 thoughts on “8 Interesting and unusual facts about Uruguay”