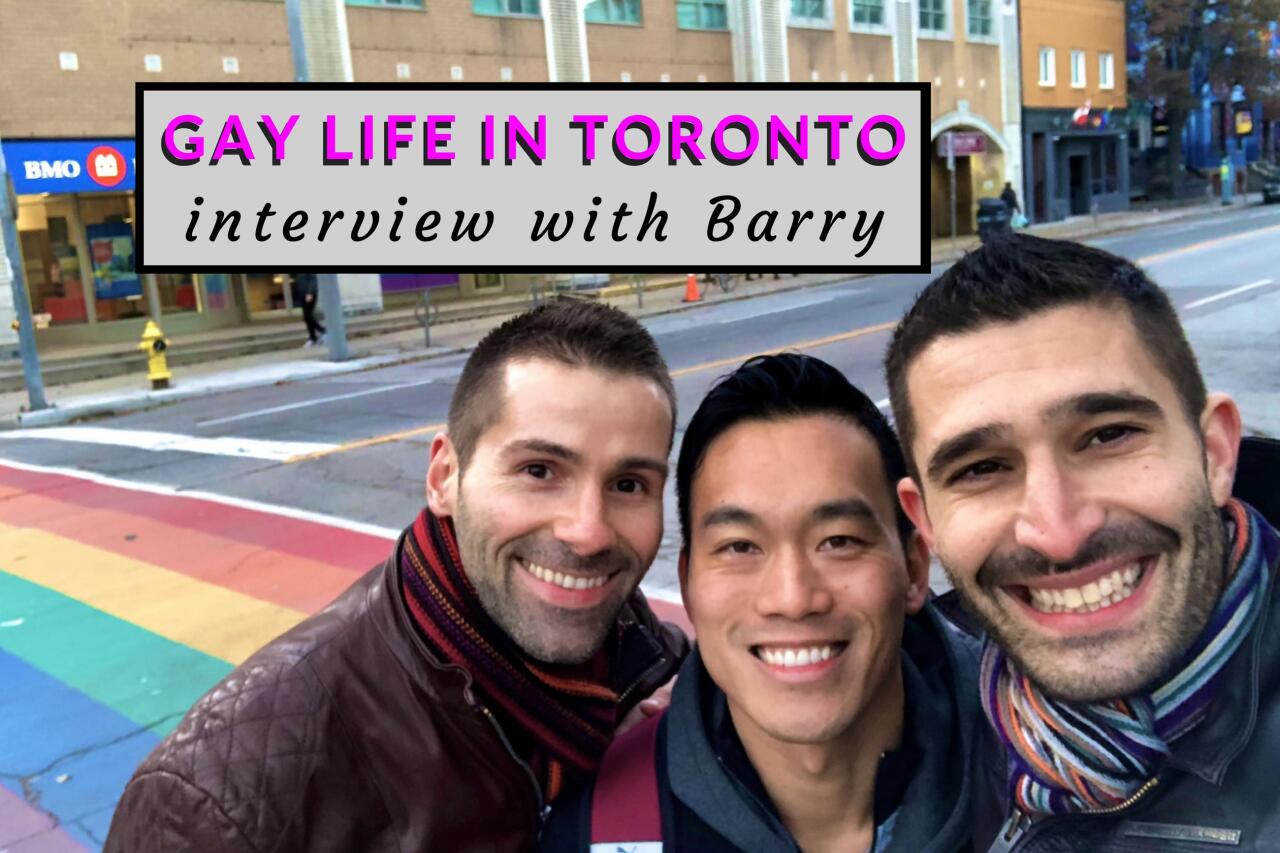 Canada is well known for being one of the most gay friendly countries in the world, with some of the most progressive LGBTQ laws. What we also love about it is that every city here has its own annual gay pride festival where its leaders join in the fun, along with an official gay village, complete with rainbow crossings.

This may seem very trivial, but just consider the importance of this in a world where being gay is illegal in 72 countries, and punishable by death in at least 8 of these. Not to mention the fact that in a lot of other countries like Russia and Indonesia where although being gay is not actually illegal, being “out” can result in loss of job, being ostracised in your community, being disowned by your family, and a big risk on your life.

During our trip in Toronto, we met up with one of our favourite gay travel Instagrammers Barry who goes by the name of “AsianMapleLeaf”. He gave us the lowdown of what growing up in Canada is really like from his unique perspective coming from a traditional Chinese family.

Hello Barry where are you from and what do you do?

Hi boys. My name is Barry Hoy. I am 38, born/raised in Toronto, and have lived there for most of my adult life. I recently moved to New York City but still travel back to Toronto every month to visit family and friends.

By day I work in Finance at a Canadian bank. By night I transform into the AsianMapleLeaf travel blogger and Instagram extraordinaire.

I am out to all my friends, who accept and love me for who I am.

For family, I am openly gay to my immediate family, but not to distant relatives. Coming from a traditional Chinese family, being gay isn’t really something you talk about, especially with relatives. At first they used to always ask about my dating life, especially when I would settle down with a nice girl.

Today I think a lot of them suspect I'm gay because they finally stopped asking me about my “girlfriend” or when I am going to get married. To be honest for distant relatives, it’s just easier not to talk about it because most are based in Hong Kong, so I rarely see much of them anyway.

What was it like coming out to your family?

I was so petrified about coming out to my parents. So I first came out to my younger brother in my mid twenties: he was looking after the cats of two of my friends who are a gay couple living together. I asked my brother if he was aware that the two guys weren't just roommates and are in fact a couple in love. He replied in a blasé way with just “yeah, duh!”, so I proceeded to tell him I was gay too. He was absolutely fine with it, as was my other brother.

Finally one Saturday afternoon after that, I mustered up the courage to tell my parents. It truly was one of the most terrifying and awkward moments in my life. Their initial reaction was shock and concern as to why I would “choose” such a difficult life for myself. Since then, they've been tolerant about it, although deep down I know they're still not totally comfortable about having a gay son.

I only started to come out when I was around 18. So before that, I would hide the fact that I'm gay and just laugh off comments about having a girlfriend. I sometimes forget that being gay was something I had to hide back then. Like any big city, it was only within the last few decades when Toronto became as gay friendly as it is now.

We have an awesome gay village in downtown Toronto, which was so important to gay guys like me growing up in the 1990s and 2000s. Today, the city's LGBTQ community is becoming more and more integrated everywhere that I can certainly envisage a point when we may not even need a separate “gay” neighbourhood anymore.

Have you ever encountered any homophobia in Canada growing up?

Fortunately never in my adult life in Toronto. At school I was teased and called names, but I think no matter where you go and how gay friendly a place is, there will always be people who are hateful.

I knew I was gay when I was in grade school  when I would “accidentally” bump into and touch the other boys' butts on our way out to recess. Also, in one art class, I made a clay figure of a really muscular man with super tight clothes and perfect hair… Luckily no one picked up on this at school in a way which would incite any bullying.

I used to love going into the online gay chatrooms (like gay.com) to connect with other gays. (Remember the days of using a dial up connection – waiting for a picture of someone to load line by line?)

In my late teens I would hang out with my friends by “the steps” of the gay village of Toronto, which is the staircase leading up to the “Second Cup” cafe. This was THE place for young gay guys to hang out and ‘be seen' at the time.

During my university years I used to run the gay dance party called “Homohop!”  It was a lot of fun – we used to give out name tags with a number on it and there'd be a message board by the dance floor where you can pin messages for a person based on their name tag number. This was old school texting at its finest!

What are your favourite gay hangouts in Toronto?

I absolutely love Woody's in the gay village. It's always a great spot to start the night, and they have some of the funniest drag shows. This is also where they filmed the North American version of Queer As Folk.

Fly 2.0 used to be my favourite gay club in Toronto before it sadly had to shut down. It's something we're seeing more and more happening in the Toronto Gay Village as commercial rents keep rising disproportionately! Other favourite gay hangouts in the gay village include Crews & Tango, which is also famous for its drag shows. Read more about the best gay bars and clubs in Toronto.

A lot of my Asian gay friends head to the gay Asian night called AX (“Asian Xpress”), which happens every couple of months. I recommend checking out the Event Brite listing for AX to find out when the next party is.

I loved the Toronto gay scene video we did together and urge everyone to watch it:

Where would you take your date for a romantic weekend in Toronto?

I would start with a picnic on Centre Island, especially if it's a clear sunny day. Then we'd rent a tandem kayak to paddle together to the other islands.

Afterwards, we'd take a stroll around the Distillery District and get a photo under the giant red heart, and finish with a romantic meal at my favourite fine dining restaurant – Scaramouche. I love the city views from here, and it's the perfect place to bring someone to impress them.

Why do you think Canada is so gay friendly?

Canada is one of the most culturally diverse countries in the world. This builds a strong foundation for diversity and inclusion. Canada was also the fourth country in the world, and the first outside Europe to legally recognise same-sex marriage in 2005 – a full decade before the United States.

I also think Canada is filled with nice and friendly people who have a culture of being extremely tolerant and accepting. Our government is also very proactive with LGBTQ events, and always backs all the Pride events taking place across the country. We even had our first national Fierte Canada Pride in Montreal in August 2017:

Are there any not-to-miss gay events in Canada?

There are so many. The main ones are the Pride events happening in each city, particularly in Toronto, Montreal, Vancouver, Calgary and Ottawa. Toronto's is one of the largest Pride events in the world, attracting almost 2 million people. I love it because the entire city gets involved becoming one giant happy rainbow family.

Whistler Pride is another gay event I love. It's a ski resort town on the West coast around 2 hours drive north from Vancouver downtown. The Pride event takes place every January and transforms the town into one big fabulous pink playground.

I also love the Halloween party in Toronto, which takes place over 3 blocks in the gay village – it's like a gay Christmas for us, with some of the best costumes you'll ever see. Also look out for the Ignite Festival happening every Easter.

Check out these best gay events in Toronto for more information.

Finally, are there any Canadian slang words you can teach us?

Oh yeah for sure eh!?

First off, Canadians often say “eh” a lot at the end of sentences. We like to buy a “double double” (coffee with two creams and two sugars) at “Timmies” (Tim Hortons) with a “Toonie” (a two dollar coin).

We, “Canucks” (Canadians) often wear a “toque” (winter beanie) in the Winter.

Also, we like to celebrate 2-4 May (Victoria Day) with a case of “two-four” (a case of twenty-four beers).  Is that enough? ‘Cause I don’t want to be a “keener” (ie an enthusiastic brown-noser!).

Be sure to check out Barry's Asian Maple Leaf blog as well as his Instagram gallery, which is full of the best thirst traps you've ever seen!

4 thoughts on “Gay life in Toronto: interview with local boy Barry from Toronto”