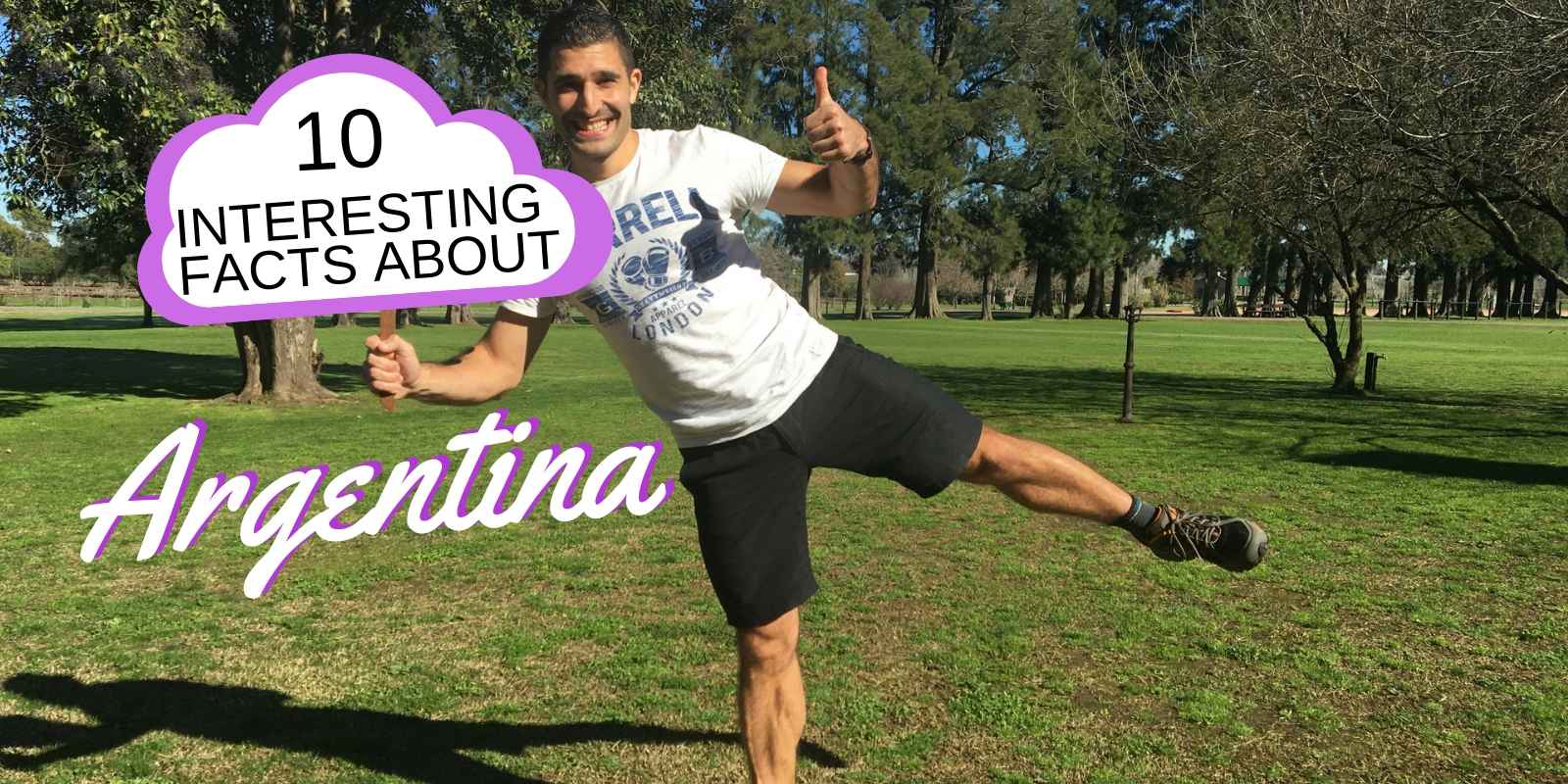 “Latins are tenderly enthusiastic. In Brazil, they throw flowers at you. In Argentina, they throw themselves at you!”

Marlene Dietrich was definitely on point when she said this. The Argentinians are an extremely passionate hot blooded bunch with their own unique style of Spanish, spoken with a strong Italian-like charisma. They will instantly embrace you into their lives and in return, you will no doubt quickly fall in love with them.

We sure did after spending half a year travelling around Argentina as a gay couple, we learnt a lot about the country that brought us steaks, Evita, tango and some of the hottest guys on the planet! Based on this, we've put together our favourite interesting facts about Argentina you need to know:

Nothing evokes the passionate spirit of the Argentinians better than this very famous sensual and seductive dance. Tango is probably the first thing that comes to mind when you think about Argentina.

At its inception in the 1880s, it was danced between 2 men, but very quickly the concept of same-sex tango dancing got lost…. Until 2002 when it became fashionable again with queer tango schools popping up across the country.

This speaks volumes in a country with such strong influence from the Catholic Church. It also shows how incredibly gay friendly Argentina is. For example, it was the first country in Latin America to legalise gay marriage in July 2010, which included full adoption rights. In addition, the right to change legal gender has been in place since 2012 and anti-discrimination laws are in full force in Rosario and Buenos Aires. This is why we rate Argentina as one of the most gay friendly countries in the world.

We took a queer tango class in Buenos Aires which was one of our favourite memories from our travels in Argentina as a gay couple. It is not only a romantic way to express the passion and fire with your same-sex partner, but a true representation of the Argentinian spirit; which is why we love them!

We found Argentina to be a very gay friendly destination, especially in the bustling capital city – Buenos Aires. There is a large gay scene in Buenos Aires as well as a smaller one in other cities like Mendoza, Córdoba, Rosario and Puerto Madryn. However, homophobia is still prevalent in more rural parts of the country, so if heading off-the-beaten-track, be cautious of this and minimise public displays of affection. Read more about what gay life in Argentina is like in our interview with LGBTQ local, Juan from Buenos Aires.

This has nothing to do with the Catholic Church or with the fact that the current Pope is from Buenos Aires. Even stronger than Catholicism is the Argentinians' love for football. Nothing quite ignites the Argentinian passion, or so dramatically unites the country than a big soccer match – particularly with main rivals Brazil. Even as an LGBTQ traveller, (who, let's face it, we're not the biggest football lovers!) you can't help noticing the obsession with football when travelling in Argentina.

The king of all is, of course, Diego Maradona. Forget the Pope – over here, Maradona IS God. There is even a Church and a religion set up in his honour. The Iglesia Maradoniana was founded in 1998 by his fans in Rosario and now have over 80,000 members spread across 55 countries. To them, he is their D10S (Dios in Spanish means God and Maradona's shirt was #10).

They also have their own 10 Commandments, which includes naming your first son Diego and making Diego your middle name!

Don't cry for me Evita!

If you think football gets the Argentinians fired up, wait till you get them onto the subject of their political figures. They are either extremely loved, or hated, with immense passion!

The most well known is the one famously depicted by gay icon Madonna – Evita Perón. Depending on who you ask (rich/poor, feminist, gay, right/left-wing), the subject of political figures like Evita is sure to ignite quite an enthusiastic response of some sort.

Despite what your sentiments may be towards Evita, she nonetheless remains a prominent part of Argentinian culture and still very popular amongst the Argentinian LGBTQ community. To mark the 60th anniversary of her death in 2012, ex-President Kirchner unveiled the new 100 pesos banknote, which features Eva Peron's face. Evita thus became the country's first woman to appear on its banknotes.

Just when you've riled up the passions of the Argentinians over football or Eva Perón, in comes the mate.

Mate (pronounced MAHteh) is serious business here. It is deeply ingrained in the culture and is the focal point in social gatherings, handed around for everyone to share.

Mate is a black herbal tea made from the yerba mate herb, grown in the Northeast provinces of Misiones and Corrientes. The herb is placed in a gourd (the mate pot), hot water added, then served from a metal straw called a bombilla.

Preparing the perfect mate is a work of art, one which only a true Argentinian will know. Watch and let us know if you think Sebastien was able to come close to conquering this skill when this cute Argentinian lesbian couple tried to teach him:

Pato has been played in Argentina since the 1600s. It is traditionally a game played by gauchos on horseback, which combines elements of polo and basketball. However, instead of a ball, a basket is used, which historically contained a live duck inside, hence the name. Today a ball is used in place of the duck, but the same rules apply.

Bizarre? The Argentinian parliament thought so in 2010 and tried to introduce a bill to elevate football to national sport status and reduce pato to a traditional sport. Defenders of pato argued that despite soccer's popularity in the country, pato is 100% Argentinian whereas football is a sport imported from England!

For the love of meat!

Argentinians are passionate about their meat and their steak is world-famous. This is largely due to the abundance of cows. According to the Cattle Network, Argentina is 1 of 5 countries in the world (along with Uruguay, Brazil, New Zealand and Australia) which has more cows than people.

The place to enjoy a beautifully prepared steak is at one of the many steakhouses, called parillas (pronounced parisha in the Argentinian dialect).

The parilla is the name of the large iron grill in which the meat is barbecued and an asado is the name given to the gathering with a group of family/friends for a large barbecue with plenty of meat, wine and laughter.

Those gaucho boys have a lot to answer for.

As well as popularising pato, the gauchos were historically the freemen of Argentina (and Uruguay) in the 1700s and 1800s, who rode horses and would catch all those many wandering cows. They would take their finds to the pulperias (taverns) and trade the cows for leather, alcohol, tobacco, salt and of course, mate.

Eventually, the method of herding cows was controlled, so gauchos had to then work at an estancia (cattle ranch) instead of roaming independently.

Today those poncho-clad gauchos are an iconic and emblematic part of Argentina. They have been greatly admired in folklore and legends. We tried out our own gay gaucho couple fantasy in Buenos Aires with our new Argentinian ponchos:

A unique way of speaking

Argentinian Spanish has a unique pronunciation with a strong Italian influence (like lots of hand gestures).

The most distinct thing you will notice, particularly in Buenos Aires, is the change of the ll (lye) to a sh sound. So for example, the word for street, calle will instead be pronounced cashe, or if you're asking someone's name, you would say “como se shama” (instead of llama).

Another very unique aspect of Argentinian Spanish is using the word Che to ask how someone is or more literally “what's up?” The famous Argentinian revolutionary, Ernesto Guevara was nicknamed Che because of his frequent use of this expression.

The words “bad wine” and “Argentina” just don't belong in the same sentence. Argentinian wine is world-famous. The country is the world's 5th largest producer, with Argentinian Malbec one of the most famous. It's so important to the country that in 2010, the government declared it the nation's national liquor.

But historically it wasn't like that at all. Until methods improved in the 1990s, wine producers were more concerned about quantity over quality, rendering most of the wine produced as unexportable. It was so bad that sparkling water in a siphon was commonly served alongside the wine to mix it and mask the flavour.

Obviously, this is no longer the case today. Bad wine just doesn't exist in Argentina! However, the culture of mixing soda water with wine prevails, so a siphon will usually be present at your table when dining out.

Our final fond memory and interesting fact about Argentina is how late evening meals are. Dinner doesn't get going until well after 10pm and goes on till the early hours of the next day.

Lunch is around 2pm, so what the heck do people do between lunchtime and midnight when stomachs get emptied? Merienda, of course! At around 6pm, the Argentinians have merienda, similar to the British tea time.

One of the most common snacks for merienda is medialunas (meaning half-moon). These are savoury or sweet moon-shaped pastries, similar to French croissants and unique to Argentina.

Medialunas are of course not just for merienda time. Any time of the day can be medialuna time, particularly breakfast time. To find out more, read our 10 favourite foods of Argentina.

1 thought on “10 Interesting Facts About Argentina”