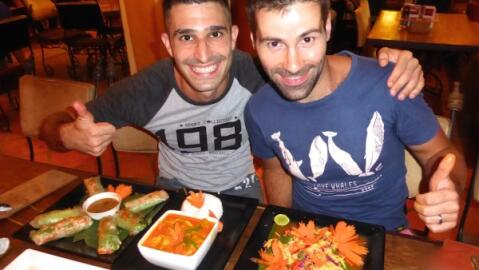 Cambodian (or Khmer) food is not really well known internationally but there are some unique traditional Khmer foods we discovered whilst eating our way around the country. Dishes like Amok are unique to Cambodia and others like Beef Lok Lak are influenced from its neighbour: Vietnam.

This is the best traditional food of Cambodia we tried, loved and want to shout to the world about:

Amok is the most well known traditional food of Cambodia. It is a thick fish-based curry which is also very popular in Laos and Thailand.

The fish amok recipe involves freshwater fish, lemongrass, chilli, turmeric and coconut milk. It is served in a banana leaf with rice and sometimes a fried egg. A beef, chicken or vegetarian variant (with tofu) can be made.

Our recipe for Cambodian beef lok lak includes chopped thin slices of beef, stir-fried with onions, cucumbers and tomatoes. The traditional dish is then served with rice and a fried egg for extra protein.

Fried crickets and silkworms for lunch anyone?

How about a platter of spring rolls with chopped red ants with a fried giant water bug, tarantula and scorpion? All of this topped with a samosa containing chopped feta, spinach and tarantula…? YUMMY !!

Ok, we're showing off now, but Cambodians make the most of what they have and cook these high protein, easy to maintain creatures for a crunchy and quite chewy meal.

We were too shy about trying cooked bugs from the streets vendor, but instead visited the famous BUGS Cafe in Siem Reap and sampled their discovery platter.

The barbecued tarantula was the most memorable: chewy body and crunchy legs!

Cambodian curries are similar to Thai curries, both using coconut milk as a base with a subtle sweetness. However, the Khmer curries are not as spicy as the Thai, containing fewer quantities of chillies.

Fresh spring rolls are not only tasty but, unlike the more traditional crispy spring rolls, they are healthier as they are not deep-fried. This is another strong example of Vietnamese influence to the Cambodian cuisine, very similar to the “Summer Rolls” of Saigon.

The filling comprises various blanched cooked ingredients, fresh herbs and cooked meat (left out for vegetarians). Rice paper is used as the outside filling and the spring rolls are served with a dipping sauce consisting of chilli, crushed peanuts and lime juice.

Mango salads are popular in Cambodia and throughout Southeast Asia. They are similar to the Thai papaya salad but involve instead a grated mango as the base.

The Khmer mango salad also uses ingredients similar to the recipe for som tam papaya salad, in particular, lime juice mixed with crushed nuts, dried shrimp, chopped garlic, shallots, chilli, mint and fish sauce. This is a really healthy dish, which can be adapted for vegetarians and vegans by not using the dried shrimps and fish sauce.

The national drink of Cambodia is named after its world-famous wonder and is the most widely consumed beer in Cambodia.

It is traditionally brewed at the Cambrew Brewery in Sihanoukville (Southwest of the country) and is a great way to wash down all the lovely culinary prizes from the Khmer kingdom.

Advice for LGBTQ travellers to Cambodia

Cambodia is very welcoming of LGBTQ travellers and ranks as one of our most gay friendly places in Asia. We never had any issues anywhere in Cambodia. We were also delighted to find quite a large gay scene in Phnom Penh. Put it this way, Cambodia has never had any anti-gay laws in its history and as of 2018, steps towards gay marriage were taken with the passing of the Declaration of Family Relationship laws. For more, read our interview with local boy Aaron from Phnom Penh about gay life in Cambodia.

This post may contain affiliate links which means if you make a purchase through one of these links, we will receive a small commission. Read our disclosure for more info.
124shares 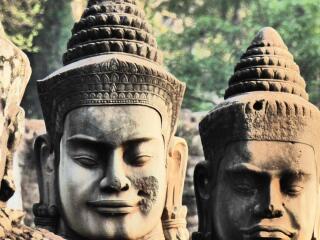 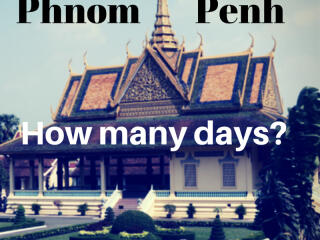 We've still yet to try a vegan version of the 'beef lok lak' - saw one in town but just not got round to it... however, i've really taken a shine to Cambodian food and there's just so much to try. I love the kroeung curry paste (so unique) and have been experimenting with using it in other dishes.

Lovely pictures of you both!

I remember the food in Cambodia being some of my favorite from all of Southeast Asia. It was totally surprising because I hadn't heard much of Cambodian cuisine before visiting - Thai food usually makes the news... But the food I ate in Cambodia as out of this world! I'm going to check out your Lok Lok recipe - that was one of my fav dishes

What the Bugs , i love it , thanks for sharing .

I was in Cambodia in 2010 and forgot how good the curries were until I read this post. I do enjoying trying different kinds of food, but the bugs are a hard for me to swallow (no pun intended). Great post! Happy travels!

Hi Wayne and thanks for your comment. Totally agree about Cambodian curries. We were pleasantly surprised. The water bug particularly hard to swallow for us :)