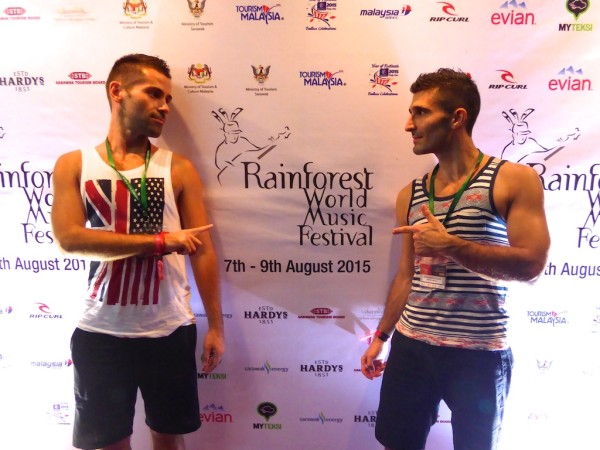 We attended the 18th Rainforest World Music Festival in August 2015 and had the time of our lives! We twerked with Congolese pygmies, danced with drummers from Reunion island, gawked at the topless dancer boys from Bali, were blown away by the talented throat singing Mongolian nomad.

As first timers, this is our beginner’s guide to the Rainforest World Music Festival and hope to inspire you to attend the next ones.

A typical day at the Rainforest World Music Festival

The Rainforest World Music Festival unites an eclectic group of international ethnic and folk musicians to perform over 3 days and lead various workshops.

A typical day starts around 2pm with a variety of workshops and interactive activities with the acts. It goes on until midnight, culminating with a live performance from each band on the main stage to a large enthusiastic crowd.

The workshops were one of our favourite aspects of the entire festival. They take place in the intimate setting of the Iban and Bidayuh indigenous longhouses in the Cultural Village.

We loved the workshops because you get up close and personal with the performers. They improvise and interact with the audience, showcasing their different styles of singing and dancing.

There are plenty of awesome workshops happening at the same time, the only problem was trying to decide which one to attend!

Imagine a room where a Celtic singer harmonises with a power (male) diva from the Reunion islands, the Mongolian throat singer joining in, Alecia Keys lookalike Sona offering her Gambian rhythms…and more!

There is an indoor theatre style stage where each performer gets the chance to feature and showcase their music. It's in a more intimate and quiet setting then the outdoor stage for the live performances in the evening.

Here's a few of our favourite afternoon performers:

And we had a blast watching and dancing along with them in the outdoor stage surrounded by the green scenery of the rainforest. These are some of our favourite evening live acts:

Practicalities to bear in mind

There are several places to base yourself for the Rainforest World Music Festival depending on your budget:

4. Where to eat and drink

Watch our complete video of our favourite acts, workshop moments and performances from the 3 days Rainforest World Music Festival:

36 thoughts on “Beginners’ guide to the Rainforest World Music Festival in Sarawak, Malaysia”