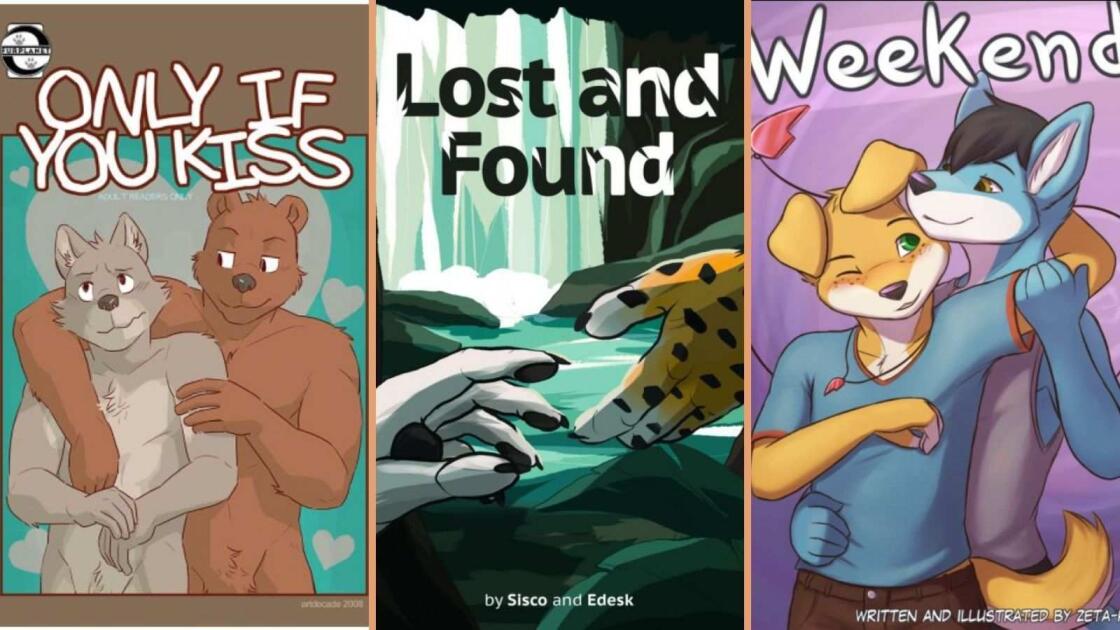 Stuck for some new reading material? We’d be lion to ourselves if we said we weren't.

So we went on the prowl to collate some of the top gay furry comics that we've both grown super fond of reading, especially whilst traveling together.

We love the fact that our LGBTQ community is so fond of the furry comic genre, gay men in particular making up a disproportionate amount of the fandom! We don’t know why, but we celebrate it as it means there's a whole bunch of content for us to dip our tails into…

In this article we explore some of the best gay furry comics that we think you’ll find furrific. There are tales of romance, love, coming out, friendship, heartbreak, and more. Gearing up for a long haul trip and want to load up on loads of furry reading material? Here's a few that should inspire you – not only are they great time fillers but also superb works of art…and boy do they keep us preoccupied!

What was originally planned as a standalone drawing, became a two-part gay furry comic series that captured the hearts of comic readers everywhere. Best-friends, Reis and Marcus are completely different from one another. Reis is out, proud, and loud, whilst Marcus is shy, athletic, and straight. Or so he thought….

As the pair grow closer throughout the school year, Marcus begins questioning himself when feelings for his friend develop. It’s hard enough wrestling with his personal problems at home, now he has this crush to contend with.

Author, Ruki, has managed to create a tear-jerking story, whilst still making room for some awesome purr-nographic material. It’s romantic. It’s exciting. It’s breathtaking. It’s the perfect getaway into the gay furry comic community, if you are even the slightest bit intrigued by what it is all about.

Plus, the follow-up ‘Unconditional’ is the purr-fect conclusion to this incredible story.

How do you like to spend your Saturday? These two bros like to chill on the coach, drink some beer, and watch movies. When one of them starts to…let’s say, indulge in some pleasure time, it leads to the two exploring a whole new level of bro-bonding time…

But it’s totally OK! As long as no kissing is involved, it’s not gay! Right?

This gay furry comic is hot hot hot! Anyone interested in yiff or ever fantasised about getting it on with their best guy friend is going to love this comic. Plus, the bear and wolf characters are ripped and packing a lot…. if you catch our drift!

And when you’re finished with this story, there are two sequels to catch up on: ‘Only If I Love You’ and ‘Only If You Know.’ Get these on your TBR!

The ’FANG’ anthology, filled with over a dozen short stories, helped to revolutionise homoerotica in the furry fandom. Known as the “little black book of furry fiction”, it is a must have for any connoiss(f)ur. Stories ranges from hardcore yiff to lighter tales of bro’s finding new ways to ‘bond.’

It includes the works of furry gay comic legends, such as Kyell Gold (known for his ‘Volle’ novels), whilst serving as the debut of the works of Mikori, Kohai and Stormacatcher. It is an example of the beauty that can happen when a bunch of queer artists/writers come together (no pun intended) to create work solely meant for the consumption of gay audiences. Not to be watered down to suit the taste of straight people, like what happens in mainstream media…

One of our personal favourites is ‘Hit the Shower’ by Red Swampwulf, a soap fuelled lovefest between Leo, a brawny lion, and his stocky bull football coach. Who hasn’t had fantasies about ‘getting it on’ in the gym showers?

Weekend adds a whole new meaning to the term ‘puppy loving.’ When two pups declare their undying affection for one another, they find the perfect way to express that love…

Author Zeta Haru finds new and innovative ways to portray, what we like to call, mattress dancing. We feel the couple are a match made in Heaven. Throughout the gay furry comic, we see them becoming more infatuated and in-love with one another, and it makes us appreciate our own relationship that much more.

The follow-up gay furry comic, ‘Weekend 2’, sees the pair cosying up for a cabin getaway, where they get up to even more lovey-dovey mischief.

Weekend is both graphically sensual, yet hopelessly romantic. Fans of the series say how hot the action is, whilst others comment that the story is enjoyable enough, even without all the shenanigans.

‘Foxes in Love’ is a series of mini-sketches, available on Tumblr and Instagram, of a pair of foxes navigating the triumphs and tribulations of a modern romance. The couple goes through situations that anybody who has ever been in a relationship can relate to… even if at times, relate to it a bit too much (side-eyes to Seby…) The duo squabble over someone stealing more than their share of the bedsheet. Not being able to decide which takeout place to go to. Or whose turn it is to be the big spoon.

Again, not wanting to point fingers…but we relate to it hard. All the while, remaining hopelessly in love.

About this gay furry comic, the author says: “While both blue fox and green fox are male, I’d like to mention that the little foxes are all deliberately depicted as androgynous/agender because gender doesn’t matter. I’ve wanted the comics I make to be portraits of love, things that are common and universal. It’s meant to be shared by and for everyone. To love and be loved is universal.”

The drawings themselves are on the simpler side. Yet that adds to the overall charm of the series. If someone is looking for something that is less screwy and more gooey, this is your comic.

‘The Internship’ is a tale of friendship, love-triangles, betrayal, and sᘿx … what more could you possibly want?

25-year-old Andrew is desperate to climb the corporate ladder at work. So, when he becomes tangled up between fondling around with the company CEO, Emery, and his affections for life-long friend, Cooper, he is at a loss for what to do.

This adds a fabulously gay twist into the age-old trope: love or career? Should he do what he has to do in order to unlock all of his wildest dreams or should he follow his heart and be with the person he loves the most?

It mixes together elements of comedy, with complex and developed characters. And yet those bedroom scenes. Wowsa!

Stephen is the sole survivor of a shipwreck. He manages to make his way to a (seemingly) abandoned island, where is left feeling starved and exhausted. Turns out he won’t be alone much longer, as he stumbles across a completely nude tribesman!

Despite not being able to speak the same language, Stephen and the tribesman (who we discover is named Aikan), find ways to communicate. When Aikan convinces his fellow tribe members to accept the lost soul, it’s up to him to show Stephen the ropes of island life. And a cardinal rule he must get used to? Being nude at all times… (We see no problem with that…)

All that’s left to happen is for an epic romance to happen. From sleeping beneath the stars to having heart-to-hearts, the relationship that forms between the two is some of the most exhilarating, sensual and hot depictions of male-to-male romance we’ve seen in a gay furry comic. The waterfall scene in particular is worth reading for.

‘Lost and Found’ combines Castaway with Brokeback Mountain in a stunning comic about community, survival and falling in love.

Chris and John are best friends. When John learns Chris is gay, he is more than intrigued. He’s never met another gay person before. He wonders how the hanky panky between two males even works. He even feels comfortable enough to ask whether he can fool around with him or not. Not for any ‘gay’ reasons, of course. Just curiosity…

Well, that curiosity soon begins to turn their relationship into a lot more…The only problem is. That Chris hasn’t popped his own cherry and is even afraid to be totally undressed with John! Meaning the more, ahem, playful components of their activities are pretty much one-note.

This story has everything. It has romance. It has drama. And yet, at its heart and core, it’s a coming-out tale. Covering the more mature areas of the coming-out experience, it tackles the issue gay men face around body image, engaging in nocturnal fondling with little to no sᘿx education, and dealing with “straight-identifying” men who view them as their (s)experiment.

Issues that are never covered much in mainstream media.

This gay furry comic is every gay boy’s fantasy come to life. Ryan is holidaying aboard a cruise ship when he catches the eye of hot lifeguard/DJ, Elliot.

Elliot is a stud, with a ripped body, suave personality, and tons of friends. He is epitome of cool. Whilst Ryan is awkward, quiet and very inexperienced when it comes to the gay world. Yet, we see Elliot take Ryan under his wing, show him the ropes, and build him up to become a happy, well-rounded gay individual.

Between the romantic dinners, the partying under disco lights, and hot tub canoodling, ‘Motion of the Ocean’ is what would happen if Queer as Folk took place on the set of Titanic… minus the iceberg and early 20th-century misogyny.

What we love about this comic is how, despite being quite naughty, it still manages to feel wholesome. The characters are well developed, care deeply for each other, and consent is portrayed so well.

This is probably the most hard-core gay furry comic we’ve come across. And whilst it’s definitely not for everyone, it is definitely worth marvelling for its incredible artwork and storytelling.

‘Burning Curiosity’ sees a father and son find new ways to bond whilst Mom is out of the household. And if that isn’t enough to tell you just how NSFW this comic is, we don’t know what will.

It’s a story that pulls together elements of role-play, suspense, and the perils of temptation.

‘Burning Curiosity’ will leave most feeling dazed, scandalised, tainted. And for those who are into it? They’ll feel all those things too. But in the best possible way. 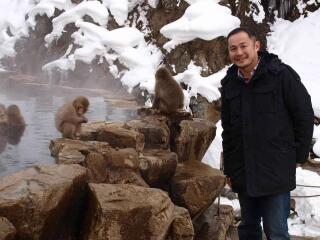 Top 25 gay icons of all time
Read Next Post →